You wouldn’t like the kind of job termite workers do. You leave home on the run and when you get to the job you chew on the walls. When get full of sawdust, you run home and vomit in front of your mother or among her newly hatched eggs. Then you run back to the job, eat some more wood and run back home, repeating the sequence over and over again. Most of your brothers and/or sisters are doing the same thing.

OK, that isn’t the most delicate way to put it. Let’s try again.

Worker termites always look busy going back and forth between their residence and the place in the wood where they are feeding. They can chew on all sorts of cellulose-containing materials such as wood and paper. Within the worker termite’s gut are some microorganisms which digest the cellulose to give sugars, primary carbohydrates used for energy. A gut full of such sugars is more than the worker needs, even with all its running. 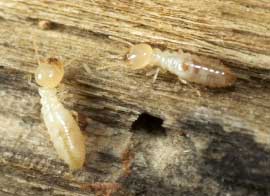 When the worker gets back to the nest it can go to the queen, to the king, or to one of the soldiers and regurgitate some of the contents of the gut, so that these other termites will have a food supply. Most termites are workers. They supply all the other termites in the nest with nourishment, but they have other important responsibilities.

As the eggs are being laid by the queen they need to be put somewhere. With an egg coming every few seconds, each egg must be carried by the workers to some place where they will remain until they are hatched. Sometimes they are set in orderly arrays, sometimes with a matrix to hold them together. All this movement of the eggs and care of the eggs is done by the workers.

As the eggs hatch, the newly liberated larvae need to be taken to another place in the nest where they need to be fed as they grow a bit. The workers will do that feeding by regurgitating some of their digested wood. It may be a few days or weeks before the newly hatched larvae are able to start running around and chewing on the walls of the wood supply. In the meantime various members of the worker group are caring for these new prospective members of the work force.

Workers also groom the queen, taking the filth and waste out of her way. With that many eggs, there is plenty of filth and waste.  Her enormous body needs constant attention and there are a host of workers to do this grooming. They also groom the king and the soldiers, making sure they benefit from the latest spit and polish.

Worker termites organize the nest, so that it serves the purposes of all the members of the colony. They use their own and others’ fecal material to help with the construction. Sometimes the simply kick the fecal matter, called “frass” completely out of the nest. In some nests they need to close up openings, in others they need to make sure there is adequate ventilation. In an expanding next there is need to construct new rooms and passage ways.

In tropical areas worker termites will employ dirt to construct huge mounds as the habitation of the colony. In some places such mounds are so solid that they last for years, even for centuries. Fossilized nests from millions of years ago have been identified.

In the highly socialized world of termites the workers know their roles and they fulfill those roles very well. They run around, most of them blind, guided by senses of feel and smell and above by sense of duty.